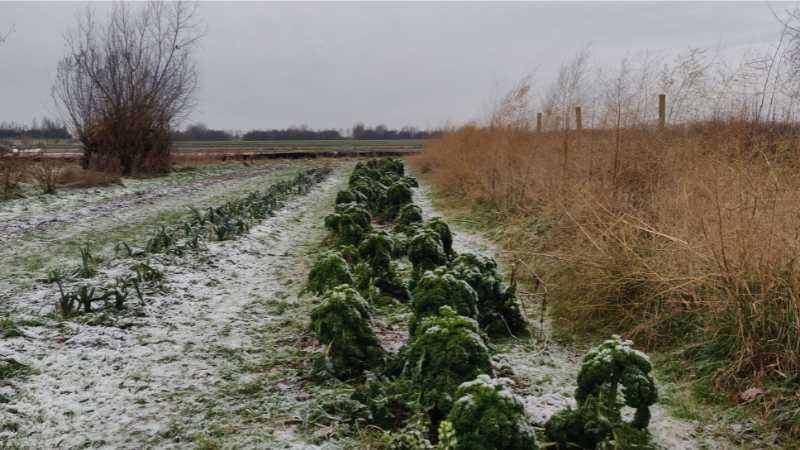 It is the holiday season and people are thinking of gifts for their friends and family, cooking meals and sharing them. It is the season where we renew our understanding of caring for those around us.

Care is something that farmers do naturally. For the past five months I have been working at the Pluk Community Supported Agriculture farm, a non-profit farm supported by community subscriptions. Pluk has two market garden plots, one at the Fruittuin van West and the other in the Lutkemeerpolder. The farmers, interns and volunteers, about a half dozen people six days a week, care greatly about the food they grow. We have no tractors or noisy machines to break the earth. We just use our backs and hands, a few shovels, rakes and hand tools. The farmers show their care by tending to seeds, seedlings, plants and the soil. The soil is most important and the most mysterious. Caring for the soil means paying attention to the tiny beings in the earth—worms, microbes, and fungi. We are careful not to dig too deeply so as not to to disturb them. We feed them with wheelbarrows full of composted leaves and wood. We protect the earth from erosion and drought with cartloads of straw. The amazing thing about farming is that if you tend the soil, the plants respond with great generosity, producing nutritious food in abundance. My sense is that our Neolithic human ancestors learned the art of giving from their plant collaborators.

Just as agricultural and industrial practices shape our larger environment, soil forms the plant’s environment. If the soil has poor nutrition or toxins, so too will the food that comes of it and so too will the people who eat it. By caring for the soil, Pluk farmers care for the 200 families that Pluk feeds.

The pay is low for the farmers, barely minimum wage or unpaid for interns and volunteers, but no one shirks the work in part because the labor is joyful. We play, talk, laugh and sing as we haul and weed and we take long tea breaks sweetened by cookies and conversation.

The Pluk garden in the Lutkemeerpolder is located at the Boterbloem farm at the end of the Lutkemeerpolder. This polder has been the source of controversy for many years, as city and business interests want to turn farmland – including some that has been organically farmed for decades – into an industrial park. A large number of citizens would rather see the 43 hectare area become a food park, Voedselpark Amsterdam, a “commons” that would offer food and recreation to Amsterdammers as well as preserving local biodiversity and providing climate benefits.

For most of human history, people have held land, not as exclusive, private property, but in common. Commons are not a free-for-all. Commoners did not own the land outright. They did not have the power to exclude others or to destroy their property. Instead, they owned rights to enjoy the fruits of the land. In order to do so, commoners agreed to abide by rules and practices that protected the resources of the commons in such a way that they were sustained year after year, century after century.

The controversy over the Lutkemeerpolder is one that has played out again and again in our modern era. From 1750-1850, English landowners enclosed 6 million acres of farmland. Without the commons, most small cottagers who had relied on the commons for pasture, foraging and farming, could no longer sustain themselves. Hungry and landless, they had little choice but to sell their labor for a pittance to large landowners and factory managers. We know how that Dickensian story ends, but there is another story here too.

In the decades after 1850, farming in England hit the skids. The acreage under wheat dropped nearly in half from the 1860s to the 1880s. Between 1850 and 1910, Great Britain no longer fed itself. Food imports multiplied eight times. With the enclosure of the commons, the English elite paved the way for the modern food system that we have today—a diet of wheat, dairy, meat and sugar imported from colonized territories around the globe.

The choice between a logistics distribution center to link together commodity chains from elsewhere and a food common where people come together to produce nutritious and affordable food for themselves and their neighbors is a story that echoes from the past. Let’s hope this history doesn’t repeat itself.